As pressure builds on the Australian Government to do more to tackle climate change, a growing number of businesses are taking the initiative, volunteering to curb their carbon footprint and offset their emissions.

They say it’s not just to save the planet.

It’s about protecting their viability in an increasingly climate-conscious international market.

Georgiana Rogers works for Carbon Neutral, a Perth-based carbon services provider, which is enjoying something of a purple patch.

Its client base has grown by 230 businesses and organisations, up 40 per cent,  over the past year. On behalf of its clients, the company has planted 30 million native trees and shrubs at a massive reforestation project in Western Australia’s Wheatbelt,  since 2008. 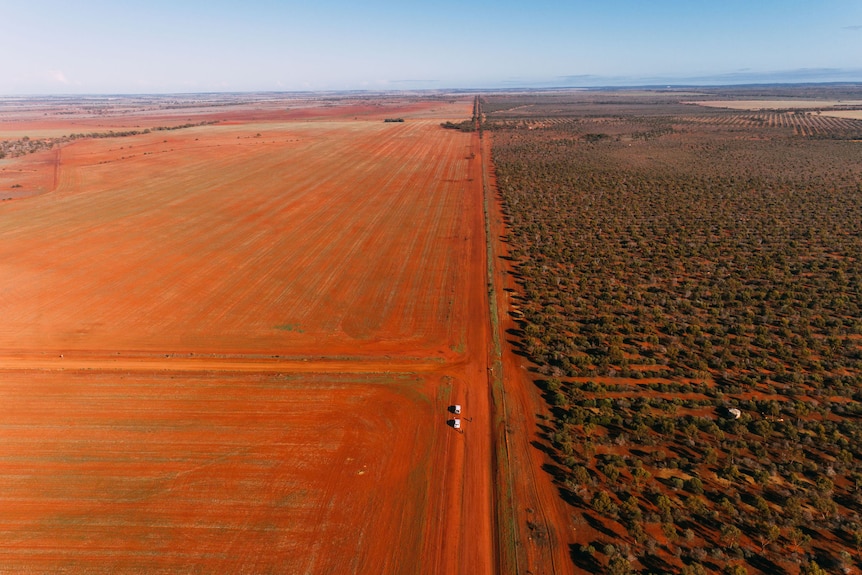 Carbon Neutral’s ambition is to plant a 200-kilometre highway of trees across the northern Wheatbelt, north of Perth.(Supplied: Russell Ord)

“Businesses are really picking this up.

”They’re not waiting for the federal government in Australia – they are understanding and seeing the writing on the wall.” A total of 14,000 hectares of trees have been planted in WA’s northern Wheatbelt so far as part of the Yarra Yarra project.(Supplied: Russell Ord)

Ms Rogers said there had been a lull in interest during what she called the “barren years”, with divisive debate in Australia on climate change creating uncertainty.

However, she said the tide was turning fast, with pressure on businesses to reduce their carbon footprint coming from shareholders, among others.

“If businesses are wanting to get investment from capital funds, they are increasingly being asked what are they doing about the climate,” she said. Rhys Arangio from Austral Fisheries says the company plants about 200,000 trees a year to offset its carbon emissions.

One of the company’s clients is Austral Fisheries, which operates in the Northern Prawn Fishery in Australia’s north and fishes for Patagonian Toothfish and Mackerel Icefish in the Southern Ocean.

Austral became the first fishing business in the world to be certified as carbon neutral in 2016.

Since then, it has been voluntarily spending about $500,000 a year on planting trees at the Yarra Yarra project to offset its emissions, mainly from the roughly nine million litres of diesel it burns across its fleet of boats.

The catalyst to act was the impact climate change was already having on its operations, according to senior manager of environment and policy Rhys Arangio.

“In the Gulf of Carpentaria across the top of Australia, there was massive mangrove dieback in 2016,” Mr Arangio said.

“And then in the Southern Ocean in that same year, there was a marine heatwave … that really cut our catch rates in half for that twelve months.” The company’s CEO David Carter said the decision also came from an awareness that business could make a difference, where politics had failed.

The company is also trying to curb its emissions and has recently added a hybrid electric vessel to its fleet.

Mr Carter said many in business had traditionally held the view that climate was the province of greenies and activists.

Did you know we offer a local version of the ABC News homepage? Watch below to see how you can set yours, and get more WA stories.

(Hint: You’ll have to go back to the home page to do this)

How to set your state news edition(Gfycat)

But increasingly, it was about “risk and money”.

“At a big end of town level, there’s the TCFD, which is the Taskforce on Climate -related Financial Disclosures and that reveals to the market how strategically they are planning to deal with their emissions exposure,” he said.

Mr Carter pointed to mining magnate Andrew Forrest’s recent pledge to become a major producer and exporter of green hydrogen and steel as a sign of how quickly the dynamics were changing.

“The sort of increased stridency of the Andrew Forrest messaging is being reflected in many boardrooms around the country and around the world,” he said.

Small businesses getting on board

At the other end of the spectrum, small businesses are also signing up in a less formal way to offset their emissions.

Marion O’Leary runs an organic skin care business from a studio in her backyard in the West Australian port city of Fremantle.

She buys a tree for every customer who spends over a certain amount to try to offset her company’s emissions, which mainly come from the importation of ingredients. “It’s very tangible for the customer that they are seeing a tree for each purchase.”

Ms O’Leary said she had become disheartened over what she perceives to be a lack of progress on climate change in Australia.

Although she believes her business is carbon neutral, she has decided against signing up for the significant cost involved in going through the Federal Government’s formal system to become certified. This organic skincare company in Fremantle plants trees for its customers to offset its carbon emissions.

“I think it’s something we could do down the track but it’s quite a big thing to take on for a small business,” she said.

“Buying trees is a way to offset our emissions and also make our customers feel that by buying some of our product, they are also offsetting some of their own emissions too.”

Few signed up to federal scheme

In total, 180 businesses are currently certified under the Federal Government’s scheme “Climate Active”, with 260 certifications for products and services between them.

This is up from 86 businesses and 128 certifications in November 2019.

Only Australia’s biggest 200-odd polluters are currently regulated and the Federal Government sets a maximum amount of emissions they can produce.

However, there are a number of options available to companies before they are penalised for exceeding those levels, including asking for their maximum emissions levels to be raised or even seeking an exemption.

In other parts of the world, pressure is mounting to commit to stricter emissions targets.

President-elect Joe Biden has re-committed the US to the Paris Climate pact and has called a leader’s summit for later this month.

The European Parliament has also endorsed a plan, which could see Australian exporters slapped with new carbon tariffs.

Louise Tarrier has “the best job in the world” working for Carbon Positive, a Perth-based charity that plants trees in Western Australia and New South Wales and helps businesses and individuals measure, curb and offset their emissions.

The group has planted about six million trees in its 20-year history and, like Carbon Neutral, is finding that its services are in growing demand.

Louise Tarrier of the charity, Carbon Positive, says many small business operators say they want to offset their carbon emissions for their children. “People are starting to wake up to the idea that they might want to sequester their carbon and reduce their carbon emissions,” she said while walking through a community plantation of native trees in Guildford, in Perth’s outskirts.

“I have certainly noticed a big difference this last year.

“Whether it’s due to more social media, people like Greta Thunberg, for example, or just a growing awareness of the climate changes we’re experiencing in our day-to-day lives.”

previous
Carbon footprint in shipping. What is it and what can we do?
next
News Corp Australia won’t muzzle commentators as it ramps up climate coverage
Contact us
Speak to our team
+61 (03) 9427 0015
Working hours
Mon-Sat / 9am-6pm