As the climate continues to increase in temperature year on year there has been a call for more sustainable burning of the Savanna, as fires have ravaged the Australian countryside year on year.

The Tiwi Islands are located just off the coast of the Northern Territory. The land is rich in Aboriginal culture, breathtaking scenery and rare wildlife. A substantial proportion of the population, which is mostly Aboriginal, lives on small outstations or homelands.

In the absence of fire management by Aboriginal Traditional Landowners, the Tiwi Islands are prone to devastating wildfires that damage the landscape and release carbon emissions. This project is aimed at helping the local Aboriginal population to control bushfires by employing sustainable burning techniques of the Savanna.  By combining the knowledge and skills of Aboriginal Traditional Owners with contemporary technology to highly sophisticated landscape scale fire management will be accomplished.

Local rangers in the Tiwi Islands will conduct controlled burns early in the dry season. This reduces the potential of bush fires spreading later on when temperatures are much hotter. Two methods of burning are utilised: aerial burning (incendiary pellets dropped from helicopters) and ground burning. The controlled fires are placed in strategic places. This will generate unburned ‘compartments’ surrounded by burned breaks to prevent/reduce the spread of wildfires if they occur.  The fires are called ‘cool fires’ as they are lit at cool parts of the day so they can be better managed. 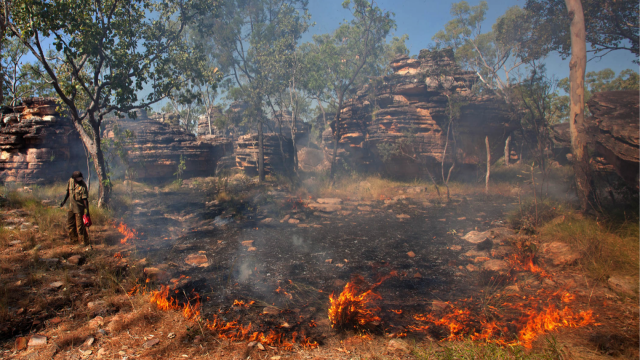 Impact of this project…